Thank you for Subscribing to Financial Tech Review Weekly Brief

Martty Martinez-Fraticelli, President and Chief Pharmacy Officer
As hordes of industries continue to reinvent themselves by acquiring intelligence through newer technologies, the sector of pharmacy claims processing can least afford to be left behind. Unfortunately, the claims processing market has been dominated by a few widely-adopted processors that were developed in the 1980s and 1990s, at a time when mainframe systems were indispensable for security and reliability related challenges.

Although most of these systems received additions and upgrades in order to comply with government-mandated regulations, the solutions ended up adding too many steps to the claims processing process—resulting in a relatively effective but highly-convoluted system.

For years, Martty Martinez-Fraticelli, a pharmacist by profession, utilized such legacy software to process claims for healthcare members from the biggest Pharmacy Benefit Managers (PBM) in the country. Gradually, he observed that the inefficiencies of those systems proved too jarring to turn a blind eye to. “If a member’s pharmacy technician made a mistake and put in an incorrect dose, the system was not effective stopping that transaction,” he recounts. Similarly, if the prescribed medication could potentially interact with other drugs consumed by the member (a common issue among cancer patients), the system is not very specific when alerting the pharmacist.

Determined to eradicate such inefficiencies from the PBM industry, Martinez-Fraticelli and his colleagues co-founded PharmPix Corporation in 2009, four years after they worked together as minority shareholders for another organization. “When we analyzed the systems in the market, we realized they were created only to process and pay claims, and not to address potential issues faced by members,” says Martinez-Fraticelli, President and Chief Pharmacy Officer, PharmPix.

The need of the hour was a more clinically-intelligent pharmacy claim adjudicator, a system that detailed the chronology of events leading up to a member processing a claim: from their trip to a physician, lab, and the pharmacist. “We wanted to ensure the pharmacist had access to in-depth data on the member even before they visited —and accordingly provide the right medication, the appropriate dose, at the right time, and for the correct duration,” explains Martinez-Fraticelli, while adding that both clinical and administrative parameters are equally critical to ensuring the member receives the correct medication.

And thus, PharmPix emerged as a “virtual” full-service PBM to service not just health plans and other PBMs, but also sponsors who manage Medicare, Medicaid, commercial, hospice, and workers compensation business. Since its inception, PharmPix has established a presence across all 50 U.S. states and territories, serving the dynamic needs of health insurance industry professionals while empowering them to solidify ties with their beneficiaries and providers.

At the core of PharmPix’s services is OneArk, an innovative technology platform that allows managed care organizations, employee unions, and self-insured employers to manage their pharmacy benefit costs in ways that were previously inconceivable!

Furthermore, the solution includes a Medication Therapy Management (MTM) capability at POS with business rules processing engine (BRPS)—to facilitate push notifications via email or text messages. With systemic and live clinical professionals also on hand—as part of the platform—pharmacists can get prior authorization on claims for prescribed medications.

Most of all, PharmPix is in the business of helping clients “save money,” which is precisely why the OneArk platform continuously examines the best pricing available across healthcare providers and makes recommendations in real time. For example, healthcare administrators or plan sponsors can access visual analyses to better understand the cost impact of PBM proposals and accordingly get the highest amount of discounts and rebates from drug manufacturers. The recommendations also include advising pharmacy benefit managers to choose generic or branded drugs—wherever needed—to further improve their savings and rebate strategies.

To understand how healthcare service providers accomplish these cost savings, Martinez-Fraticelli cites the example of a Medicare Employer Group Waiver Plan (EGWP) created by one of PharmPix’s clients. The plan was suffering elevated pharmacy PMPM (Per Member Per Month) and needed a cost turnaround to survive in a Medicare-regulated environment. Upon transitioning to PharmPix’s full PBM services, the client’s pharmacy costs saw a reduction of nearly 21 percent from the previous year. Crucially, only 25 percent of the reduction was due to pricing reductions, which meant the utilization reduction (of the pharmacy benefits) represented two-thirds of their savings within less than a year.

“Our aim is to help clients save money,” says Martinez-Fraticelli. “Good pharmacy practice saves money not only on the pharmacy side but also in the total healthcare costs.” Simply put, PharmPix’s holistic approach to pharmacy benefits ensures its clients’ members (end users) are making very few visits to the ER or getting hospitalized, which creates a healthier ecosystem.

As for the swiftness with which a client can benefit from PharmPix’s services, Martinez-Fraticelli cites another customer success story involving a PBM based in Texas. A contractual issue with the previous vendor required PharmPix to implement their pharmacy benefits over a weekend despite the fact that accurate and complete eligibility data was unavailable. PharmPix worked with the available data and built a customized eligibility tool and an eligibility call center for correcting inaccurate eligibility data, along with a communication strategy with providers to make them aware of the sudden change of PBM.

Not only was the client thrilled with their new accurate benefit design and formulary management, it also successfully transitioned all its members to the same within two weeks, backed by PharmPix’s services.

As evidenced by the two use cases, PharmPix serves PBMs by offering a white label solution, which is yet another major differentiator for the company. PharmPix licenses out its cloud-based software, which means PBMs, who typically rely on technology vendors, can avoid the process of purchasing servers.
Martinez-Fraticelli elaborates, “In dealing with other processors, PBMs never get control of their system. They have to submit data to another server and somebody else from a third-party company executes tasks on their behalf.” Moreover, if a PBM has to make an amendment, such as introducing a new plan or adding new members, they have to wait months for the system to be updated. “With our services, it happens instantly,” adds Martinez-Fraticelli. PharmPix also provides training to its clients, if need be. The training lasts less than two weeks, after which the client can assume full control of the platform.

Furthermore, full-service PBMs usually employ their own people and only provide in-house services. However, PharmPix provides all the necessary components for a full-service PBM contract, yet some of its services are contracted with a third-party provider. This gives plan sponsors the flexibility to continue using their preferred provider for certain services.

“Over the next two to three years, we are set to become the biggest pharmacy claims processor in the U.S. and its territories”

In summation, PharmPix facilitates the very best of every contract and every channel, and it continuously looks for the best from all providers. “This is true management of your pharmacy benefit, and your company’s healthcare costs,” stresses Martinez-Fraticelli.

As PharmPix continues to serve some of the biggest managed care organizations—both on the Medicare and commercial side—it is particularly focused on making specialty drugs affordable to plan members. With several specialty drugs costing up to a whopping $1 million, PharmPix has honed-in on a new management solution for these drugs. Specialty drugs amount to roughly 50 percent of total drug costs for most PBMs. However, none of PharmPix’s clients have reached even 40 percent and linger in the 32-35 percent range, which is unheard of!

With medication costs spiking on an everyday basis, PharmPix plans to tap into its extensive network, which includes over 65,000 pharmacies, to give its PBM clients a competitive advantage. “Over the next two to three years, we are set to become the biggest pharmacy claims processor in the U.S. and its territories,” emphasizes Martinez-Fraticelli.

In the coming years, PharmPix is also keen on exploring other segments, such as creating more technology to improve “the overall member journey in the healthcare industry.” Although members are not its direct clients, they are still the end-link that ultimately benefit from PharmPix’s technological innovations.

In the wake of COVID-19, the company admittedly underwent a slight downturn, mainly since a lot of members stopped visiting pharmacies due to lockdowns. That said, with a pipeline of growing clients, PharmPix expects its business “to explode” in the aftermath of the pandemic.

On a closing note, Martinez-Fraticelli says PharmPix is leading a paradigm shift in the healthcare industry as pharmacies evolved from merely “medication sellers to a real health service.” While stating that pharmacies can no longer be treated as just one silo in healthcare, he says that health plans and PBMs have to work in-sync and share data—for the wellbeing of the member. “This is where we are headed—a world where there is better health data sharing between all components in the healthcare ecosystem to ensure the benefit of the member,” he concludes.

Description
A pharmacy benefits information and management provider that offers innovative services for health plans and insurers, medium to large employers and union groups, private and government health programs, including Medicaid and Medicare. At the core of PharmPix’s services is OneArk, an innovative technology platform that allows managed care organizations, employee unions, and self-insured employers to manage their pharmacy benefit costs in ways that were previously inconceivable. Since its inception, PharmPix has established a presence across all 50 U.S. states and territories, serving the dynamic needs of health insurance industry professionals while empowering them to solidify ties with their beneficiaries and providers 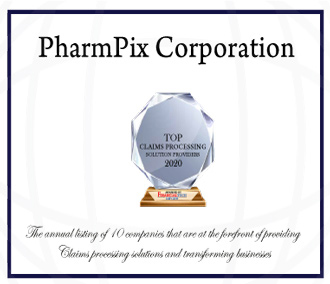 Copyright © 2021 Financial Tech Review All rights reserved |  Subscribe |  About Us

However, if you would like to share the information in this article, you may use the link below: